a) Associated with unengaged head

b) Associated usually with brain hypoxia

c) Decrease in the fetal beat that peaks after uterine contraction

Cardiotocograph shows type 1 variable decelerations. What is the cause of this feature?

Cardiotocography (CTG) is the most commonly used test for antepartum and intrapartum foetal surveillance. Negative predictive value of Normal CTG (% of fetuses with a normal CTG that will be born non-hypoxic) is

5. Classify this CTG as 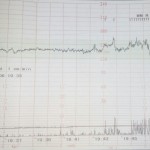 And state number of 1) Reassuring, 2) Nonreassuring or 3) Abnormal patterns. 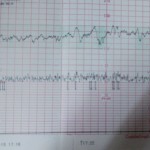 CTG oNon Stress Testutput for a woman not in labour. What does this CTG read?

Correct Answer: Normal trace is defied as an FHR trace in which all four features are classified as reassuring. Reassuring FHR is when: Baseline: 110–160; Variability: ≥ 5; Deccelerations: None and Accelerations: Present. SO THIS TRACE IS NORMAL AS IT HAS ALL 4 COMPONENTS OF REASSURING.

7. What is abnormal in these CTG? 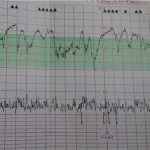 Correct Answer: d) Saltatory pattern. It consists of FHR fluctuations >25 bpm occurring either 3 to 6, or >6 times per minute. It is usually caused by acute hypoxia or mechanical compression of the umbilical cord. This pattern is most often seen during the second stage of labor. The presence of a saltatory pattern, especially when paired with decelerations, should warn the physician to look for and try to correct possible causes of acute hypoxia and to be alert for signs that the hypoxia is progressing to acidosis. Although it is a nonreassuring pattern, the saltatory pattern is usually not an indication for immediate delivery.

8. What does this CTG read? Two abnormal findings

A sinusoidal fetal FHR pattern is defined as a pattern of fixed, uniform fluxuations of the FHR that creates a pattern resembling successive geometric sine waves. It frequently is described as undulating and smooth and is characterized by the absence of variability.

True" sinusoidal FHR patterns are associated with the following fetal conditions that result in either severe fetal anemia or severe/prolonged fetal hypoxia with acidosis.

10. What does following CTG read?

a) Normal trace - All four features classified as reassuring are present.